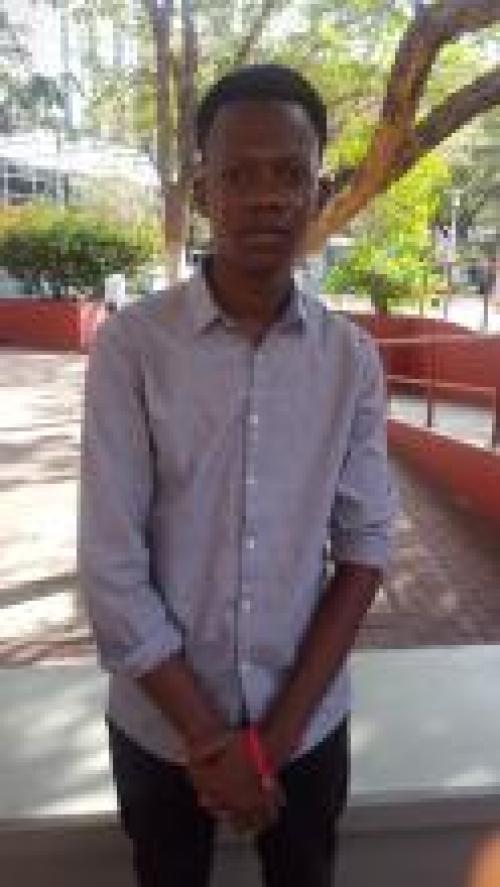 Sam Ndungula, a NUST Bachelor of Science in Applied Mathematics and Statistics graduate is a seasoned poet who has graced Windhoek’s Spoken Word stage several times. He performs under the moniker, Delusional Sam, which, he says, is like his alter ego. It is a name given to him by friends who say his performance persona is a stark contrast to his real personality.

Sam, however, prefers to call himself “The Prodigal Surrogate Son.”

“So it’s the whole prodigal-son-returns concept, but the only difference is that the son was never really the father’s son to begin with,” Sam clarifies. In a world that tries to make him conform, he chooses to be different. It is his “constant existential struggle” with the world that makes him a divergent thinker who expresses himself through the colourful creativity of lyrical speech and wisdom.

Sam is antagonistic to the oft adopted attitude that poets need to be a voice to the voiceless, and he has developed somewhat of an adverse approach towards this ‘saviour complex.’ He believes that by expressing oneself first and then sharing that with the rest of the world, people can draw personal meaning from it afterwards, “It should be first and foremost about you! I think genuine poetry comes from you, and you reflecting on life, and those who can relate can then relate.”

A seasoned debater and public speaker, Sam’s life revolves around words. He urges fellow students to voice themselves and refrain from staying silent about matters that affect them. Using NUST as an example, he elaborates: “The SRC president ran for office for a third consecutive term, but you have people who are speaking behind closed doors about how he is diluting democracy and consolidating power. I don’t like people being silent about those things; I like people to speak out. They say, ‘words are only useful if you speak them.’”

From racism to high tuition fees, Sam believes that Namibia is grappling with the same problems as the rest of the world, but on a micro level. He cited land problems and high housing prices as some of Namibia’s most pertinent issues, and like a number of his divergent thinking friends, Sam thinks that free sanitary pads should be offered in place of free condoms. “After all, you can control when you are going to have sex, but you cannot control your next menstrual cycle.”

It goes without saying that he is an avid reader. Atlas Shrugged by Ayn Rand is one of his favourite books.

If he had one wish, what would it be?  “Consciousness of myself. You have constant struggles as an individual and the biggest struggle is defining and redefining yourself,” he says.

“Love is waking up at 5:00 to pray for the sanity of a man who never thanked God for sending him an Angel gift, coated in human and dipped in compassion,” reads one of Sam’s poems.

If this writer had one wish it would be that you could find time to visit The Prodigal Surrogate Son’s blog. He surely has a lot to say, and maybe, just maybe, it is exactly what you want to hear!