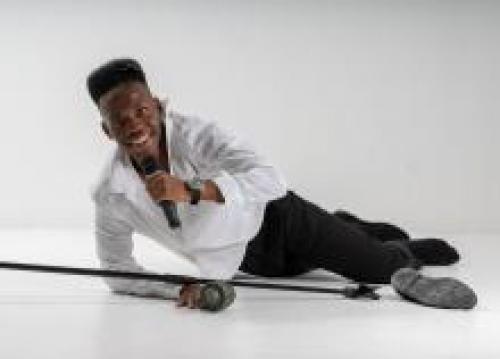 Eish guys, me I'm tired. Ironically, I'm even typing this at 01h48 am after a long day of hosting a beauty pageant, finishing an assignment for Services Marketing, performing a comedy set AND planning operations for the Marketing Society's stalls at the Career Fair…since I'm president of the Marketing Society on top of everything else! Aiye man guys me I'm tired!

My name is Tapiwa Makaza, a second year Marketing student, one of Namibia's leading comedians and also a human being (who needs to function like a robot if he wants to get everything done). My comedy career started at 15 years when I took part in a competition called Last Comic Standing Namibia; this was my first time and I won! Everything changed and I blew up quickly afterwards since every media outlet was writing, reporting and interviewing me as "15-year-old comedian wins Last Comic Standing.” Fast-forward throughout my high school years until matric; I was still doing the most in comedy, from SADC tours to starring in commercials until the end of high school. I decided to take a gap year and go to Europe to work as a comedian / entertainer on a luxury cruise ship, until my father decided I should return and get a degree. He had to before I get too comfortable living the comedian life overseas and so here I am!

High school was easy. University is a completely different story - guys it is TOUGH juggling comedy and school at this level. On top of that, I consider myself to be an established Namibian comedian, which now means I'm more involved in the comedy stuff, not only with stand-up but I write, produce and star in my own comedy series of short films and sketches. These were broadcast on TV last year and went viral online [YouTube: Tapiwa Makaza].

I have commercials and ads to star in, scripts to write, sketches to shoot, events to host/MC and tours to places such as Cape Town and around Namibia. I won't lie sobiso it's very difficult but I CAN DO IT! All this takes a lot of my time but I believe it's good for me in the end and I'll reach my goals if I just keep pushing every hustle I have! You should too! If you do not believe any of this just follow me online @tapiwa_makaza/Tapiwa Makaza and see for yourself  .